Valencia based American teacher, writer and musician Ree Gillet has asked us to share a song for you and your younger students: 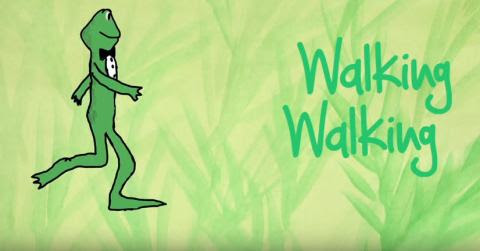 Review: Etta and Otto and Russell and James

Hiya All!
I have this list of things I'd like to do if and when I finally stop tearing around.  Well, let's see...I'd like to start exercising, polish up my Spanish, learn Arabic or some other equally challenging language, learn a wind instrument and join a band.
Etta had her wish list too and top of her list was her wish to see the sea or as she called it : the water. Emma Hooper's debut novel "Etta and Otto and Russell and James"  intrigues us into accompanying Etta across the vast Canadian Praire. She ignores us though as does James her faithful companion.   Does James the coyote really exist?  Is he a figment of her imagination, is he a personification of someone from her past.  James is just one of the many enigmas that surface through the novel.  Why didn't Otto follow her? Why didn't Russell stop her? She was old, she had a failing memory, how could they allow her to walk on towards the horizon and the sea beyond???
It's instances like this when you feel Emma Hooper's narrative swing between the real and the make-believe so smoothly that you ride it comfortably.  You feel the wide expanse of the vast grasslands and you see and accept its emptiness.  The appearance of the occasional town you tolerate, after all it's where Etta meets reality, if only briefly so.
We go back in time, back to the early-mid 1900s. To the days of mixed level/age classrooms, letters, censored letters between Otto and Etta that took months in reaching, the war.  A book filled with beautiful, sensitive depictions of life.  One that leaves the reader free to choose which bits are real and which are make believe, whether the book is laced with symbolism or not. A book that allows you to reach your own conclusions.  Believe me, you'll enjoy the book, regardless of  the option you choose!
We meet on the 27th of November, 1900hrs at Luis Vives to talk about our next book "Can't we talk about something more pleasant?" by Roz Chast.
Our bIook for January is "The God of Small Things" by Arundhati Roy.
See you on the 27th of November and until then...
Take care

Language Assistant opportunities in the UK and Spain too!

----DISCLAIMER----
This message is for the use of the intended recipient(s) only. If you have received this message in error, please notify the sender and delete it. APAVAC accepts no liability for loss or damage caused by software viruses and you are advised to carry out a virus check on any attachments contained in this message.